You are here: Home / Our Chapter / Lighthorse Harry Lee Camp

The Light Horse Harry Lee Camp is the Caloosa Chapter Color Guard unit within the Florida Sons of Liberty Brigade and the NSSAR Color Guard. The purpose of the Camp is to promote the  stated objectives of the NSSAR which are Historical, Patriotic, and Educational. Public appearances of the Camp  provide excellent recruiting opportunities while educating the public.

The Light Horse Harry Lee Camp has members wearing Continental Army uniforms as well as Militia uniforms. Some Color Guardsmen wear a uniform similar to that worn by their patriot ancestor(s) which requires the member to perform research to determine details of the uniform.

The militia uniform is often less expensive and simpler to acquire than the Continental Army uniform. Over time a member may add accessories to the Militia uniform, making a transition to the more formal uniform.

Our Camp has marched in the Edison Festival of Lights Parade, the Lehigh Spring Festival Parade, and the Cape Coral Veterans Day Parade. We have also presented the Colors for the dedication of the East County Water Control District building and other public events including the rededication of the Iwo Jima Statue in Cape Coral, historic marker dedication of an historic cemetery and Memorial Day events.

The Caloosa Chapter Color Guard represents the SAR at local, regional, and national events such as the 2016 Wreaths Across America commemoration in Cape Coral. As a speaker at the event, Compatriot Dwight Elam told the story of the Last Naval Battle fought off Cape Canaveral in 1783 to the assembled audience.

Ceremonies commemorating Memorial Day are occasions for the Light Horse Harry Lee Camp to participate in public events such as this at the Memorial Gardens Cemetery in Fort Myers.

Those who attend the annual Congress join with the NSSAR Color Guard.

At the Last Naval Battle Celebration, the Light Horse Harry Lee Camp joined with the Florida Sons of Liberty Brigade to troop the Colors and participate in a wreath laying ceremony at the memorial at Merritt Island in 2016. 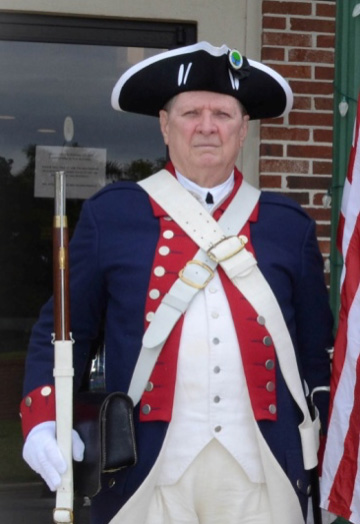 Home Newsletter About us